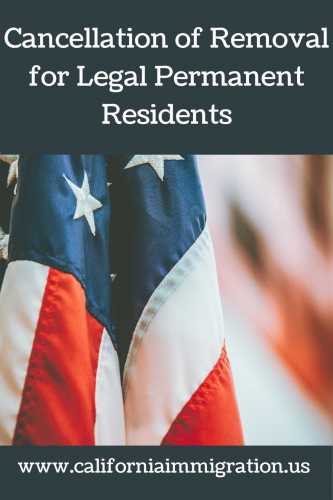 “Whether you already have your Green Card or are here illegally and are in deportation proceedings, you might be able to stay and win if you apply for Cancellation of Removal.”

This is the type of cancellation of removal where you never had any legal status and were placed into removal proceedings. Generally, you need 10 years of physical presence in the U.S., good moral character and an immediate relative who will suffer extreme hardship if you are deported. Usually, those relatives would be either a USC or LPR spouse, child or parent.

This is the type of cancellation of removal where you have your Green Card, but have committed a crime and are now in deportation proceedings. This is much easier to win than the other cancellation of removal. Basically, you have to show the crime is not an aggravated felony and that the Immigration Judge should grant it in the discretionary factors that are presented to the Judge.

Is it easy to win a Cancellation of removal?

No. It is not easy. However, it does depend on which Cancellation you are applying.

Can i apply for this without the help of a Deportation Attorney?

That would be a very bad idea. It is a purely discretionary form of relief. You would not represent yourself in criminal trial to avoid jail would you? This is your life here and if you lose, you will be deported outside the U.S. Thus, you should get a qualified and experienced Deportation Lawyer.

Applying for Cancellation of Removal will involve going to Immigration Court, preparing the application and having a trial.

Many people think if they have just been in the U.S. for more than 10 years that they can apply for Cancellation of Removal. However, that is not the case. You must be in deportation proceedings and the government must be trying to remove you from the U.S. Only then can you apply for Cancellation of Removal in front of the Immigration Judge. If after the merits hearing, the Judge grants this form of relief, you will be granted lawful permanent resident status and/or allowed to keep your Green Card. Make sure you get a consultation from a qualified deportation lawyer.

Get Consultation
Go to mobile version