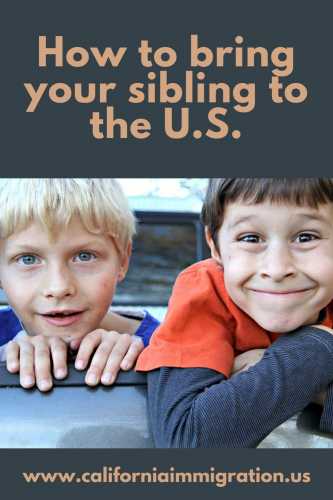 A sibling is a brother, sister, stepbrother, stepsister, or adopted brother or sister.
For the necessary sibling relationship to exist,
Each person must have been a child of at least one of the same parents.
The siblings need not share the same biological parents as long as both became “children” at the appropriate time (before the age of 16 in cases of adoption, and before the age of 18 for stepchildren).

A legal immigrant (or “lawful permanent resident”) is a foreign national who has been granted the privilege of living and working permanently in the United States.
There is a three-step process for your brother or sister to become a legal immigrant

Can I petition my adopted sister

Law allows young as 13 to get married

The INS must approve an immigrant visa petition that you file for your brother or sister.

The State Department visa bulletin must show that a sibling immigrant visa is available to your sibling,
Based on the date that you filed the immigrant visa application.

Depending on the relationship and the country involved,
The wait for an available sibling visa number may be several years.
You may refer to the Department of State’s Visa Bulletin for current priority dates.

If you are a U.S. Citizen and at least 21 years old,
You are eligible to petition to bring your brother or sister to live and work permanently in the United States.