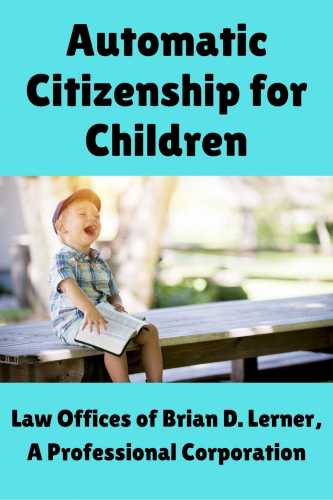 My child is a U.S. Citizen and I didn’t even know!

Question: We just petitioned our child after not seeing him in our home country for over 2 years.
He will be coming to the U.S. as a Lawful Permanent Resident.
When can we apply for citizenship for him?

Answer: On October 30, 2000, the Child Citizenship Act of 2000 (CCA) was signed into law.
The new law permitted foreign-born children (including adopted children) to acquire citizenship automatically if they meet certain requirements.
It became effective on February 27, 2001.

Question: Which Children Automatically Become Citizens Under the CCA?

Question: Must an application be filed with USCIS to establish a child’s citizenship?

Answer: If the child falls under this provision, they will automatically receive a Certificate of Citizenship within 45 days of admission into the U.S.
This program eliminates the need for the issuance of a Permanent Resident Card for newly entering children, since these cards are not applicable to U.S. citizens.
In other words, if the child falls under this provision of law, the moment they are admitted as a Lawful Permanent Resident, they are immediately considered to be a U.S. Citizen.

Tags:U.S. Citizen
previousCan I Get an Orphan into the U.S.?
nextDo I need to leave the U.S.? Form I-131, application for travel document